I am writing a review of the Thompson Chain-Reference Bible from Zondervan Publishers. I was sent this Bible to review by Bible Gateway for free as a member of BG2 (#BibleGatewayPartner). The Thompson Chain-Reference System had its start in 1890 by Dr. Frank Clark Thompson. It has gone through many revisions and updates with recent research and new methods of compilation. I received the Hardcover edition from Bible Gateway to review.

I first became aware of the Thompson Chain-Reference Bible in the 1907’s when I received one as a gift from my wife. It was the King James version, and I preached from it for many years. My copy has notes on almost every page from my sermons. In the 1980’s I bought a copy of the NIV Chain-Reference. It also became a standard go-to in my study and research for sermons and Bible lessons. The Thompson Study System allows a student of the Word to follow a topic from Genesis to Revelation. This edition has over 8,000 topical listings utilizing over 100,000 marginal references. I have found it over the years to be a virtual mini-library of information to aid in study, sermon preparation, and personal devotion.

I was very much impressed by this 1997 update of a very familiar friend. Dr. John Jauchen was the Editor that worked to update this version. This new and expanded edition has many enhancements aided by the use of computer technology of today. Some of the changes include renaming the two indexes to better describe their function – the Alphabetical index and the numerical index. The editors of this version worked to complete the Chains to include both the Old Testament and the New Testament. They also worked to make all the names of the Chains consistent. One of the most valuable parts of the Helps was and is the Analyses of the Books of the Bible. In this edition, they have been standardized in their method of study and presentation.,

The Bible Helps is made up of over 75 practical study aides. I have mentioned the Alphabetical and Numerical Indexes, the outline studies of the Books of the Bible already, there are also Biblical Character studies, Harmonies (such as the Life of Joshua, Gideon, David, the Gospels, Paul’s Missionary Journeys, Golden Chapters, Hebrew times, seasons, and festivals, and Memory Verses) to help with personal study and lesson preparation. There is a supplement with Archeological research and findings, not to mention 14 full-color maps to guide one to see the places that the Bible took place.

Having made the Thompson Chain-Reference Bible Study System a major part of my first-stop in Sermon and Course preparation, I must heartily endorse this system to anyone who wants to study deeper and prepare broader in your Biblical knowledge. You can find this Bible in many Christian Book stores and online at the FaithGateway Store.

Posted by Doc's Musings at 2:53 PM No comments:

A Time for a Sabbath Rest

TEXT: Mark 6:31 (NASB) - "And He said to them, “Come away by yourselves to a secluded place and rest awhile.” (For there were many people coming and going, and they did not even have time to eat.)

From January 2018 through the end of February 2021, I have been lead by the Lord to write these daily blogs - "Doc's Musings." I have posted them faithfully on Facebook for many to read and be encouraged, challenged, and grow from these words. I have been blessed by the numerous comments over these years, and have let God moving in using these in many lives.

After much prayer, meditation, and searching of the Father's heart, I feel that the above verse has been given to me at this time. He has opened many doors of opportunity to me and has led me into many new challenges and blessings.

Having said that, I believe that at this point in time, God is calling me to take a hiatus from the production of these devotional and instructive thoughts. I pray that one day soon He will lead me back into this ministry for Him. These have all been written to bring Him honor and glory. I praise His Name for using me this way. May all praise, honor, and glory be given to my Lord and Savior Jesus Christ, and may we one day share together again.

To go back and read some of the previous posts I have written, please feel free to go to my Blog - Doc's Musings - at:

The Gospel and the Kingdom - Matthew - The Conversation Down the Mountain

TEXT: Matthew 17:9-13 – “Now as they came down from the mountain, Jesus commanded them, saying, “Tell the vision to no one until the Son of Man is risen from the dead.” 10 And His disciples asked Him, saying, “Why then do the scribes say that Elijah must come first?”

11 Jesus answered and said to them, “Indeed, Elijah is coming first and will restore all things. 12 But I say to you that Elijah has come already, and they did not know him but did to him whatever they wished. Likewise the Son of Man is also about to suffer at their hands.” 13 Then the disciples understood that He spoke to them of John the Baptist.”

We are going to continuing in Chapter 17 today. In this chapter, we saw yesterday that God confirms Peter’s earlier acknowledgment of the deity of Christ with the Transfiguration on the mountaintop. This of course created a series of thoughts, concerns, and questions. So today we will consider their conversation as they came down from the mountain-top.

We are first told of the Command in verse.9. Jesus told them to not share what they saw until His Resurrection. Of course, the disciples then express their Confusion, they want to know if Elijah would come before the return of the Messiah? They are getting the picture that Jesus is teaching He is the Messiah, however, it did conflict with their understanding of the Scriptures.

So, Jesus gives His Clarification of what the Scriptures were teaching. His answer was in two parts:

It was then that the Disciples came to an understanding in verse 13, what He was showing them. They understood that he is referring to John the Baptist.

So, how do we apply this account to ourselves today? Let me give you two quick takeaways.

The Gospel and the Kingdom - Matthew - The Confirmation on the Mountain

TEXT: Matthew 17:1-8 – “1Now after six days Jesus took Peter, James, and John his brother, led them up on a high mountain by themselves; 2 and He was transfigured before them. His face shone like the sun, and His clothes became as white as the light. 3 And behold, Moses and Elijah appeared to them, talking with Him. 4 Then Peter answered and said to Jesus, “Lord, it is good for us to be here; if You wish, let us make here three tabernacles: one for You, one for Moses, and one for Elijah.”

5 While he was still speaking, behold, a bright cloud overshadowed them; and suddenly a voice came out of the cloud, saying, “This is My beloved Son, in whom I am well pleased. Hear Him!” 6 And when the disciples heard it, they fell on their faces and were greatly afraid. 7 But Jesus came and touched them and said, “Arise, and do not be afraid.” 8 When they had lifted up their eyes, they saw no one but Jesus only.”

We are going to start Chapter 17 today. In this chapter, we see that God confirms Peter’s earlier acknowledgment of the deity of Christ with the Transfiguration on the mountaintop.

A quick survey of the Gospels reveals that there were some places that Jesus only took Peter, James, and John. He did not take the twelve everywhere He went. How and why Jesus took these three to places where he did not take the other nine we will never know. The fact remains that Jesus took Peter, James, and John to places He didn’t take everyone else.

If you read the Book of Acts, the only disciples mentioned out of the original twelve are Peter, James, and John. It appears that they took leadership responsibility after Jesus left that the other nine did not take.

None of the other disciples are mentioned in the Book of Acts, leading us to believe that the fact Jesus spent more time with them was preparing them for more responsibility than the rest.

So, here is the question of the day is "Who are your three?"

So, in verses 1-3 we are shown what they see. The Appearance of God’s Messiah (vs. 2). His face and clothing shine like the noon-day sun. The Greek word translated transfigured metamorphoō means to change into another form, to transform, to transfigure. His clothes were perfectly white – bright as light. What the disciples were privileged to see was Christ shown not in His humiliation, but in His glory.

They also saw the arrival of God’s messengers – Moses and Elijah appear and speak to Jesus. (vs.3). Why these two? To the Jews (remember who Matthew is writing to) Moses stood for the Law, and Elijah stood for the Prophets. In other words, all the Old Testament Scriptures. Jesus came to fulfill the Scriptures, not take them away.

In verse 4 we observe what the disciples say – They want to build 3 shelters (tents) for these important people. While Peter has made this suggestion, all the Disciples hear the Father speak from Heaven declaring His love for His Son. (vs.5) When this happens, we read what the Disciples did (vs. 6-8). They are driven prostrate and were greatly afraid – they have heard the voice of God. (vs. 6). However, Jesus comes and reassures them (vs. 7). And when they looked up – there was no one there now except Jesus.

So, as we could imagine, this prompted what we will consider tomorrow, their conversation coming down the mountain. 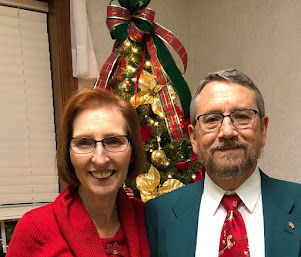 Doc is an Transitional Pastor living in Laurinburg, NC. He has been a Senior Pastor, educator, and writer. He is presently a Chaplain (Capt) with the USAF-Aux CAP, a Chaplaincy Blue Hat with North Carolina Baptist on Mission, a volunteer Chaplain with Scotland Regional Hospice, an author with Christian Publishing House in Ohio, and an Adjunct Professor in the School of Education at Liberty University Online.
D.Min, DBC, Thd, MS.Ed, BCPC

I am writing a review of the  Thompson Chain-Reference Bible from  Zondervan Publishers .  I was sent this Bible to review b...


Check out the Available resources from this conservative Christian publishing company.